It is with gratitude and humility that we acknowledge that we are learning, speaking and gathering on the ancestral homelands of the Muhheaconneok (or Mohican) people, who are the indigenous peoples of this land. Despite tremendous hardship in being forced from here, today their community resides in Wisconsin and is known as the Stockbridge-Munsee Community. We pay honor and respect to their ancestors past and present as we commit to building a more inclusive and equitable space for all. A statement from the Thomas Cole National Historic Site developed in conversation with the Stockbridge Munsee Cultural Affairs Department

The gardens and grounds of the Thomas Cole site are open from dawn until dusk, free of charge. We invite you to take a walk around the property, enjoy the flower garden, and take in the view of the Catskill Mountains from the porch of the Main House.

In Thomas Cole’s time, the home and surrounding property were referred to as “Cedar Grove.” The Cedar Grove property has a long history that began with a 1684 land grant, followed by a land subdivision in 1773. Beginning in 1797, the Thomson family (ancestors of Thomas Cole’s wife, Maria), started with a small parcel and developed adjoining lots. In 1815, they built the Federal-style Main House that remains today, and quickly compiled a substantial farm property of about 110 acres. Despite the property’s frontage on the Hudson River, the Main House and infrastructure were built along a local turnpike road – today’s Spring Street – that crossed through the western portion of the property, where the land sloped away from the river. As such, Cedar Grove has always enjoyed an orientation towards the western prospect of the Catskill Mountains. 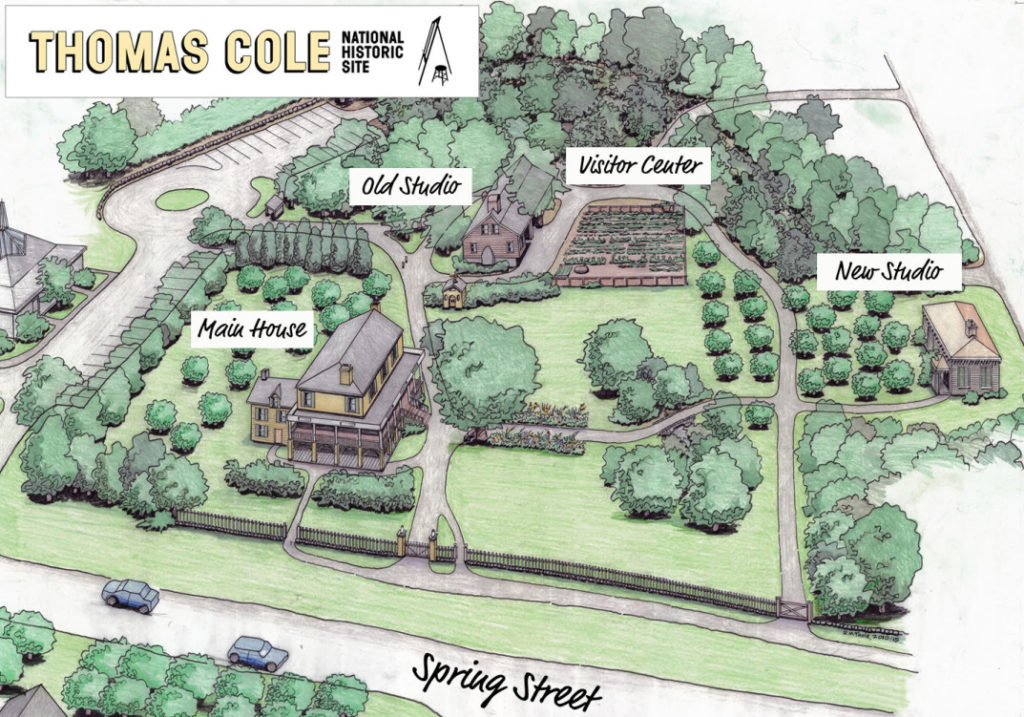 The formal garden was restored in 2002, and consists of two flowerbeds flanking a central gravel path that is aligned with the front door of the Main House. Cole’s wife Maria and her sisters tended the garden, and period accounts describe it containing a variety of flowers, including hollyhocks, larkspur, poppies, roses, china asters, dahlia, and valerian.  A massive honey locust tree, planted when the house was built nearly 200 years ago, anchors the garden.

In autumn 1817, John Alexander ordered a wide variety of fruit trees, enough to plant a sizable orchard of about 80 trees. The 1817 nursery order includes fifteen varieties of apples with such fanciful names as Seek No Further, Sweeting, Ox Noble, and Siberian Crab. The order also included four varieties of plums, five of peaches, five of pears, and three varieties of cherries. Most notable for us now in this tree order was the inclusion of “12 three thorned acatia (sic).” Today, the acacia is called honey locust (Gleditsia tricanthus) with its distinctive three-branched thorns. Today, a large specimen of this tree continues to grow close to the front porch of the house. If this tree is indeed one of the twelve planted in 1817, it is now about 200 years old.

Although Thomas Cole came to love Cedar Grove for its beauty and its views of the Catskill Mountains, his involvement with running the family farm was minimal, with only a few references to it in his extensive correspondence and journal entries. He occasionally mentioned the grove of trees east of the main house, and he referred several times to the flower garden south of the house, but his sole occupation continued to be his art. After John Alexander’s death in June 1846, Cole lamented that Thomson had not been “spared to see a little longer the luxuriant growth of the vines and fruit which he had planted and pruned with so much skill and pleasure. He had a passion for Horticulture, and was skilled above most men and it was amusing to hear him [speak] on a peach or apple, a pear or strawberry.”

An extensive kitchen garden was located along the south side of the Storehouse. Originally a quarter acre in size, it was cultivated with a wide variety of vegetables, bush fruit, and grape vines. A small portion of it has now been restored, and you can see evidence of the larger kitchen gardens in the terraced land.

At one time the Woodlot encompassed about four acres of mixed trees that were periodically thinned for firewood. Following the picturesque style, it was kept rough and unmanicured. Paths and wagon drives led through the woodlot to open fields and Cedar Grove’s frontage on the Hudson River. About one acre of woods remains today on the east end of the historic site.