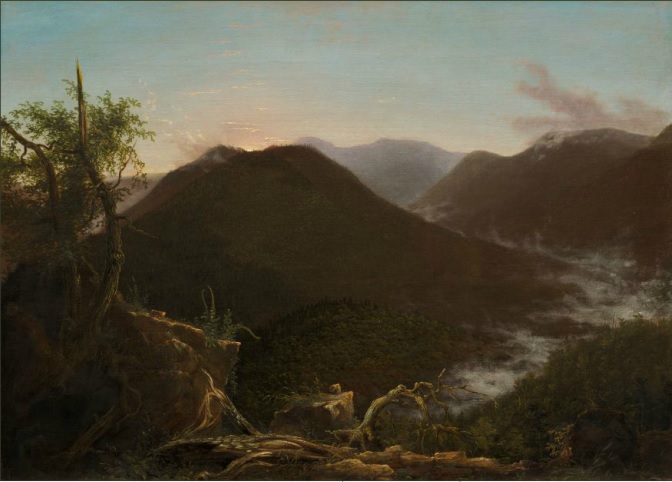 In the early nineteenth century, many in this country were searching for a style of art that they could call their own – something uniquely American. Painter, poet, and essayist Thomas Cole (1801-1848) responded to this quest by creating pristine landscape paintings unlike any yet seen. His vision of wild and untouched scenery with majestic mountains and tangled forests stood in stark contrast to the gentle landscape images that had come before.

Influential people of the nascent New York cultural scene embraced his work enthusiastically, and Cole became the leader of an informal alliance of landscape artists now known as the Hudson River School. Cole, Asher Durand, Frederic Church, Sanford Gifford, Jasper Cropsey, and other painters, along with literary figures such as William Cullen Bryant and James Fenimore Cooper, forged a self-consciously “American” style and landscape vision for what was still a relatively new nation.

The artists of the Hudson River School were united by their belief that their art might lead to spiritual renewal and contribute to the formation of a uniquely American national culture. Their work established a notion of America as a new Eden, a concept that still resonates with artists, environmentalists, and landscape enthusiasts to this day.

See a list of prominent figures of the Hudson River School

Get information especially for collectors

Program and operating support are provided by The New York State Council on the Arts.