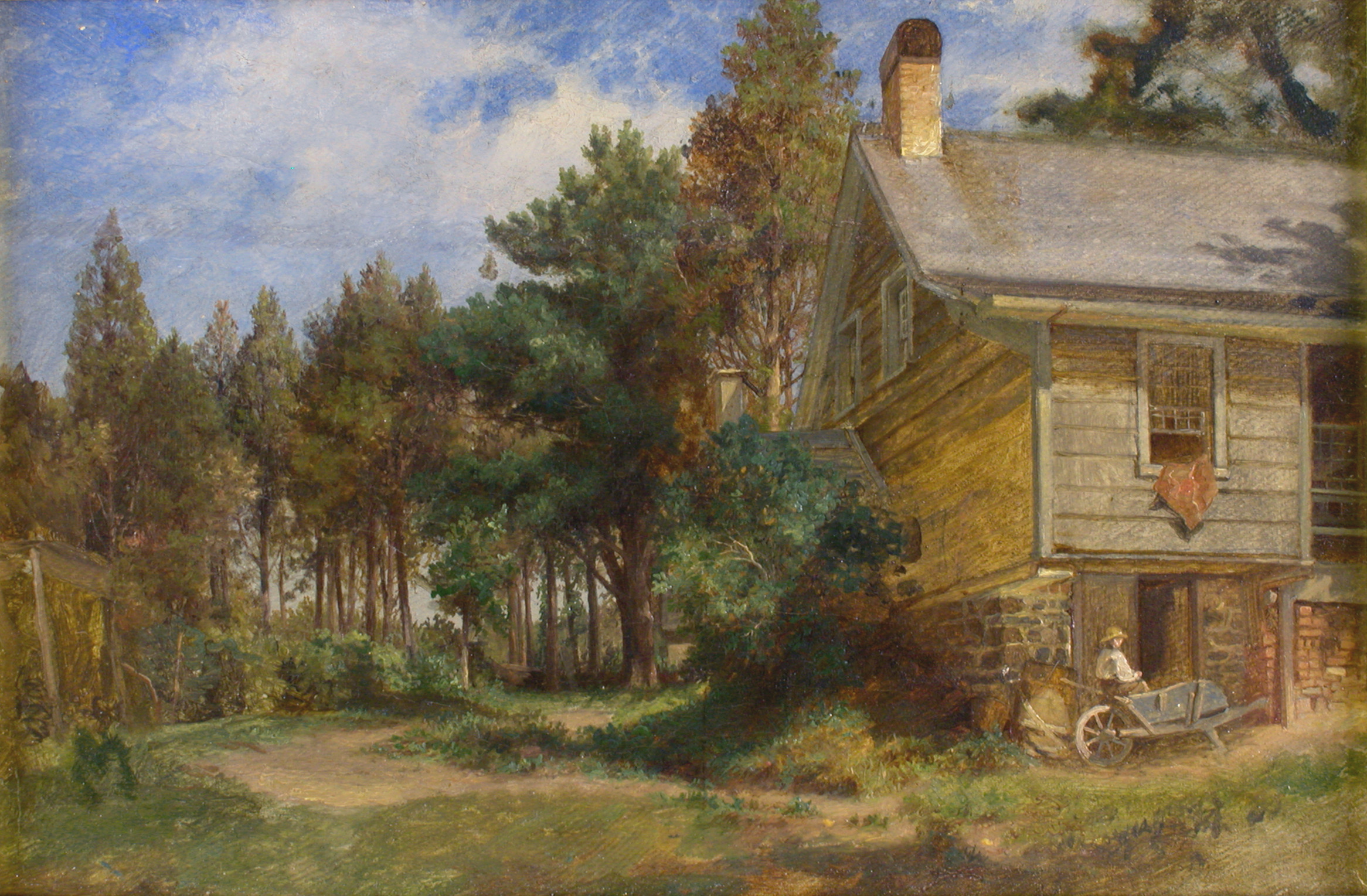 This studio is the where Thomas Cole created many of his major works. The building was restored in 2004 and is now furnished with his original easels and other art-making equipment and tools.

Do you know that I have got into a new painting Room[?]  Mr. Thomson has lately erected a sort of Storehouse and has let me have part of it for a temporary painting room; it answers pretty well, is somewhat larger than my old one and being removed from the noise and bustle of the house is really Charming – what shall I be able to produce in it heaven knows – the walls are unplastered brick with the beams and timbers seen on every hand – not a bad colour this pale brick and mortar.  I am engaged upon my great Series.

When/By Whom it was Built:

Begun in early 1839, and overseen by John Alexander Thomson and Thomas Cole. Information about the team of people who built the structure is not currently known.

By Whom it was Designed:

The Other Half of the Building: Storehouse

During Thomas’s residency here, the property consisted of 110 acres of farm fields and orchards. The east half of this building was the storehouse, a crucial part of the farm operation. It was likely in this building that harvested and saleable crops (hay, oats, corn, barley) were stored. Today, this east half of the building is the Site’s Visitor Center and Gift Shop.

Immediately after his marriage in 1836, Thomas Cole worked in the Main House itself. But in 1839, he was able to move to this building, a larger and more private space. He considered this new building to be “a temporary arrangement,” for he hoped to build a new house with a studio inside. The house was never realized, and instead he painted here for seven years. Thomas painted many of his most important works here, including the Voyage of Life for his patron Samuel Ward, as the ceiling was high enough to accommodate large canvasses. A fireplace permitted Thomas to work in any season, and he added a large skylight-like window to admit northern light, the preferred light for painting. Thomas welcomed visits from his family to the studio: as he worked, Maria, who married Thomas, read to him and offered advice, and the Cole children often visited. The Old Studio also afforded space for grinding pigments into paint, constructing stretchers, stretching canvasses, and fitting pictures into frames. Painting at this time involved a lot of hard physical labor—active, smelly, and frequently messy.

Among other works, Thomas pained The Voyage of Life series in this space. Click here for more about the series.

About Contemporary Artwork On Site:

This property has long been an inspiration for artists. In addition to Thomas Cole, family members Sarah Cole (1805-57) and Emily Cole (1843-1913) were both practicing artists; and many others visited here to see the place where Thomas lived and worked. We seek to continue this tradition of living artists actively working in and being inspired by this site, by working with artists through OPEN HOUSE: Contemporary Art in Conversation with Cole. This annual series of curated contemporary artist installations is located within, and in response to, the historic home and studios of artist Thomas Cole. Operating from the concept that all art is contemporary, the program activates conversations between artists across centuries. Exhibitions and artworks have ranged from those that literally reference Thomas’s iconic works to those that expand on issues and themes relevant to Thomas, including art, landscape, history, and balancing the built and natural worlds. OPEN HOUSE projects shed light on the connections between nineteenth-century American art and our contemporary moment. Click here to see the current or upcoming exhibition in the series.

I am still a Youth in imagination + build Castles still.